We will let you know once Boys on Film 16: Possession is available to watch where you are

Boys on Film 16: Possession will now be on your WATCHLIST when you go to MY HISTORY on your VIEW PROFILE page. 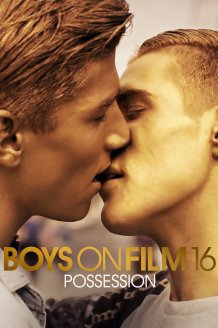 As a brooding teenager, BOYS ON FILM is celebrating its (not so) sweet sixteen with an astonishing selection of the latest international gay short films.


Featuring golden boys, teenage lust, self-conscious dolls, chance encounters and a vengeful creature, alongside a holiday romance and a young man’s attempt to conceal his sexuality from his mum, BOYS ON FILM 16 is our most possessive collection yet.


GOLDEN Dir. Kai Stänicke (Germany) 3 mins - As a golden boy becomes a golden man, his carefree spirit wanes under the weight of being different. As he grows up he becomes more introverted until, one day he discovers he’s not alone.


JAMIE Dir. Christopher Manning (UK) 9 mins - Shy, quiet Jamie, spends a revealing afternoon with Ben after meeting on a dating app. As they chat, Jamie finds himself opening up and letting loose his hopes and fears in an unexpected awakening.


B. Dir. Kai Stänicke (Germany) 15 mins - Torn between a cold relationship with K. and her feelings for another woman, shy and insecure B. is heading for a disaster. For too long she has suppressed her desire and lived a lie. But is it really too late for B. to follow her heart?


PYOTR495 Dir. Blake Mawson (Canada/Germany) 15 mins - One evening in Putin’s Moscow, 16-year-old Pyotr is baited by an ultra-nationalist group known for their violent abductions and attacks on young gay men. But Pyotr isn’t as defenceless as he might appear…


WHEN A MAN LOVES A WOMAN Dir. Charlie Francis (UK) 10 mins - When Nick, who still hides his sexuality from his mother, gets a call to say she’s coming to visit, he desperately turns to best friend Amanda to pose as his girlfriend. Nick must use charm, cash and emotional blackmail to convince a hungover and reluctant Amanda to continue the ruse.


FOLLOW ME Dir. Anthony Schatteman (Belgium) 16 mins - Eighteen-year-old Jasper is madly in love with his art teacher. Overcome with confusion and longing, Jasper takes to following his teacher and his new girlfriend wherever they go.


CHANCE Dir. Jake Graf (UK) 17 mins - Trevor’s life has become a void, following the passing of his wife and long term companion, Doris. A chance encounter in the park with a mysterious stranger equally troubled by his own dark past jarringly reawakens him, and forces both men to live again.


SIGN Dir. Andrew Keenan-Bolger (USA) 15 mins - When Ben summons up the courage to talk to Aaron at their local subway station he is surprised to find that Aaron is deaf. Despite the communication barrier love blossoms, but their very different worlds threaten to tear them apart.


AWAY WITH ME Dir. Oliver Mason (UK, France) 11 mins - Alex and Paolo have just hooked up in London. Despite only knowing each other briefly, Alex whisks Paolo away to his Aunt’s home in Nice. Alex believes it’s a holiday romance, but does Paulo feel the same?


WE COULD BE PARENTS Dir. Björn Elgerd (Sweden) 15 mins - Marely left Erik when he found out he was selling himself for sex. Now, Erik’s last chance to get Marely back is to make this film explaining the reason why; so that they could afford to become parents one day.