We will let you know once Boys On Film 1: Hard Love is available to watch where you are

Boys On Film 1: Hard Love will now be on your WATCHLIST when you go to MY HISTORY on your VIEW PROFILE page. 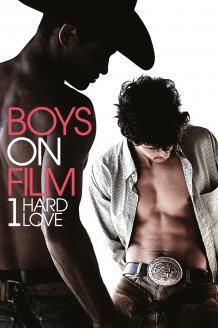 Summer (UK, 9 mins): Two late-teen males, good friends, are in a London park. They find themselves talking about blow-jobs, and one of the friends is nervously trying to pluck up the courage to speak his mind...


Gay Zombie (US, 20 minutes): A West Hollywood zombie, Miles, is convinced by his therapist ('How's the flesh-eating coming along, Miles?') to try to resolve his uncertain desires. He visits a gay bar, and is treated as a freak by the patrons. He does meet two nice guys, who try to give him a make-over. But will his blood-hunger prove too much of an obstacle to forming a relationship?


Serene Hunter (France, 13 mins): Set in Paris, the 'hunter' of the title is a 30-something gay male who has a string of one-night stands. Content being free and unfettered by relationships, he happily moves from encounter to encounter. He then surprises himself by becoming involved in a more substantial relationship...but can the hunter within him be tamed?


Le Weekend (UK, 14 mins): A 22-year-old French film student, Terry, visits London to make a film for his class. He meets a handsome male in Soho; the language barrier proves problematic, but the two end up sightseeing and hitting the bars. When Terry needs somewhere to stay for the night his new friend offers to share his bed with him. Only one dilemma - Terry identifies as straight, but if he discloses this, will he loose the offered roof?


Cowboy Forever (Brazil, 27 minutes): set in the stunning landscape of Brazil; beautifully shot with a background of water, open plains and sunsets. The narrator, Govinda, is a ruggedly-handsome 20-something 'campiro' (cattle-herder), who has an empathy with the natural world. He narrates this quasi-documentary of the change wrought in his life by the arrival of a new cattle-hand, Jones. After a night in town together, Govinda begins to wrestle with his unexpected desire for his new friend - but the latter seems only interested in females. Moreover, how can Govinda reconcile the machismo of his outdoor life with his feelings for Jones?


Scarred (UK, 10 mins): Another unusual short. An early 20s male has a significant scar on his face from a knife wound - and is fed up of the unwanted attention that it attracts. Will he find someone who can see past the scar? The answer may lie with an older, middle-aged architect, who seems to be the one person to whom the scar is invisible. But what is the architect's real interest...?


Packed Lunch (Australia, 24 mins): A fairly explicit documentary on the affinity between gay-identified males and the Speedo. Interviews with the first maker of Speedos, collectors, swimmers, and DNA magazine.


Mirror Mirror (Australia, 11 mins): An intense short film; simple in execution, highly moving in its message. An ageing, overweight male sits in front of his mirror, trying to say goodbye to his alter-ego, a once-glamorous drag queen. As he reluctantly throws out the wigs and make-up, she appears in the mirror and argues against her banishment ('You're nothing without me').


VGL-Hung! (UK, 20 mins): Terry, an unattractive 30-something male, feels out of place and unloved among the muscled, topless denizens of London gay clubs. Searching for a guy to hook-up with online, his 'fairy godmother' appears on his screen, giving him the opportunity to transform his looks. Terry adopts various physiques (courtesy of some Eurocreme models), and meets up with different guys...but will he now find what he's looking for?