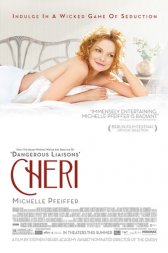 Cheri
Germany, France, UK, 2009, 86 minutes Comedy, Drama, Romance, History
Cheri has the trappings of a May December affair that starts off as a casual arrangement yet blossomed into intense feelings of love. Set during the Belle Epoque or the so-called "Beautiful Era" of France,  one is treated to lavish production design and impressive wardrobes but  more importantly, I was personally drawn because it had Michelle  Pfeiffer and  Kathy Bates in its cast.   Pfeiffer shines as Lea,  the courtesan and seductress while Bates was outstanding as Cheri/Fred's mother.  Rupert Friend,  himself also an acclaimed actor,  took to his role as if it was second nature. Aside from the highly emotional scenes of Friend and Pfeiffer what  I  relished most  were the scenes between Pfeiffer and Bates  and how Bates  can effectively deliver her lines  wherein you can actually feel the dread  each time  she laughs.  Her character's  overwhelming sarcasm was well captured in this particular line   intended for Pfeiffer, and to quote: "Don't you find now that the skin's a little less firm, it holds perfume so much better!"
Like this Review?
Write your own review?
DooVOTE
Not for me
Like this Review?
Write your own review?
COMMENTS 2
Your Comment...
LIKES 1
ClementineB
ClementineB