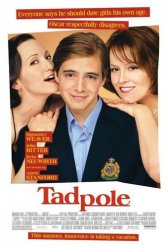 Tadpole
USA, 2002, 78 minutes Comedy, Drama, Romance, US Indie
This romantic comedy and coming-of-age  film commands attention  for its powerhouse cast  which included  John Ritter, Sigourney Weaver , Bebe Neuwirth and Aaron Stanford. The  story is a bit unusual, that of a 15-year old boy who is in love with his stepmother but  along the way you forget about the nuances  as  one becomes engrossed with the stellar acting  prowess  of Neuwirth, Weaver and Ritter.   Director Winick,  known for films like Letters to Juliet and Charlotte's Web playfully tweaks things  although  I  find the title quite misleading ,  well, sort of.
Like this Review?
Write your own review?
DooVOTE
Not for me
Like this Review?
Write your own review?
COMMENTS 0
Your Comment...
LIKES 1
snakeeyes
snakeeyes