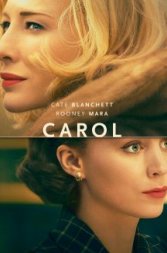 Carol
USA, 2015, 115 minutes Romance, LGBT
The nostalgic sensitivity of this love story comes through in all aspects of the film. The music, the costumes and the body language are gentle and elegant, creating a  soothing aesthetic which contrasts with the theme of restriction/repression in the lesbian affair due to the expectations  of 1950s New York in which the story is set. The dialogue is not excessive, which leaves the opportunity for the actresses to show rather than tell. Rooney Mara successfully presents her endearing role as the young Therese Belivet who captivates the audience instantly with her curious glances at the beginning of the film, as we see Carol through Therese's gaze in the department store. Cate Blanchett as Carol, with her delivery of her lines in her playful, husky voice, instills in us a curiosity for the character too, much like Therese. However, we never quite feel as though we really know what Carol is thinking. As a fan of the original novel written by Patricia Highsmith (author of The Talented Mr Ripley) I was impressed by Todd Haynes' direction for the way in which there is a sense of tension maintained throughout the film which foreshadows the developing plot. This sense of tension was one of the book's most impressive and compelling traits that drove the plot forward, which obviously featured stylistically out of habit by Patricia Highsmith as a commendable writer of psychological thrillers. This sense of tension is portrayed in the teasing music which seems to encapsulate quirks of the various characters we meet along the way, as if we are gradually getting to know them through the soundtrack as well as the onscreen action, where attention to detail is key in contributing to the nostalgic love story, in every brush of a hand, shift in the fabric of clothing, or a silent lingering glance.
Like this Review?
Write your own review?
DooVOTE
Not for me
Like this Review?
Write your own review?
COMMENTS 0
Your Comment...
LIKES 3
blacksnakemoan
amjadalisada
ClaudineC
blacksnakemoan
amjadalisada
ClaudineC