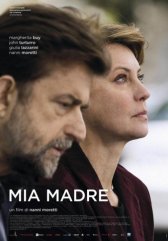 My Mother
Italy, 2015, 106 minutes Drama
Oh boy. Was I the only person in the audience to find this to be a total bore? The character of Margherita is utterly unconvincing (the film she is in the process of making looks like a clunker of the first degree, yet we're supposed to believe she is an auteur), and so too, I'm afraid, is the character of Ada, her dying mother, and the set-designed-to-the-hilt hospital she is in. The whole thing felt very Hallmark Channel. Others in the same audience as me were bawling their eyes out, whereas I couldn't be done with the thing sooner. Obviously this sort of thing translates very well in Italy, but I don't buy that it's because Moretti's films don't translate into English well (hardly any of his films were released in the UK), because he's made much better films than this. Turturro was a welcome reprieve from the hanky-wringing, but soon he too began to grate. His hamming was the only meat in this sadly flimsy film. Having said all this, you may love 'Mia Madre', it just didn't work for me.
Like this Review?
Write your own review?
DooVOTE
Not for me
Like this Review?
Write your own review?
COMMENTS 0
Your Comment...