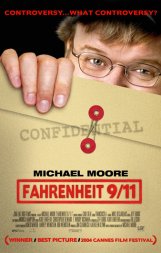 Fahrenheit 9/11
USA, 2004, 122 minutes Documentary
Michael Moore's political documentary uses humor and connect-the-dots investigative journalism to question the Bush administration's motives for wars in Iraq and Afghanistan. The film argues that President George W. Bush and his inner circle used the media to further an agenda that exploited the 9/11 attacks. The close ties of the Saudis to the Bush family, the cynical profiteering of corporations and a political elite beholden to special interests are all cited as elements of a very corrupt system. This is the film that made Michael Moore's name and manages to be both thought provoking and also very funny at the same time.
Like this Review?
Write your own review?
DooVOTE
Not for me
Like this Review?
Write your own review?
COMMENTS 0
Your Comment...