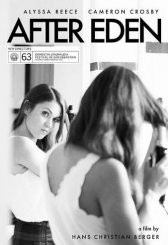 After Eden
Canada, 2015, 80 minutes
After Eden is a steely porn-based drama that subtly presents the industry of packaged sex appeal in terms of cold business strategy and consumerism, subduing lust, romance and the human form within a cunning paradigm of marketing and commodification. It’s debatable just what the idealistic Eden of the film’s title emblematically is or was, or if it even existed at all, but Hans Christian Berger’s film depicts sexuality after ‘the fall’ as yet another corner of life engulfed by the binaries of the information age – a calculated practice of reductive stimulus and response to support instant gratification. It’s certainly a provocative work that may well be met with accusations of both sordid exploitation and regressive prudishness but, in its intense precision, After Eden reveals a deconstructive thoughtfulness that goes beyond the realms of pretentious art-porn and finger-wagging anti-porn alike. The results are frequently unsettling but more than a little fascinating, shedding harsh light on the flashy efficiency of Apple-era salesmanship by creating a dark, subversive love story that’s informed by those same standards.There are three scenes in After Eden that are particularly likely to leave a strong impression on most viewers. All three of these scenes in question begin in roughly the same way, with rising porn star Eve (assuming that’s her real name) being interviewed about her sexual desires and experiences. Whenever Eve is asked about her thoughts on a particular bedroom practice, her answer, almost invariably, is to stare directly into the camera and state with conviction that she loves it. But by the time some blatant contradictions start emerging in her personal accounts of sexual experiences, it’s clear that, to a large extent, Eve is just telling her audience what they want to hear.  As far as the viewer knows, her bubbly persona could merely be a contrived performance not too far removed from a slick car dealer’s  persuasive pitch.The audience’s complicity comes to the forefront as two out of these three scenes venture into softcore territory with some camerawork that frequently puts the audience within groping distance of Eve’s often scrutinised breasts. Of the course, the hands we see doing the fondling actually belong Eve’s male co-stars and the pornographers behind the camera, the latter of whom are tellingly only ever shown with their faces blurred out. Such sequences probe the dynamics of demand and power that characterise the relationship between actor, viewer and pornographer, while wisely refraining from laying responsibility at the feet of any one group. It’s a troubling thought that, when Eve tells the (presumably fabricated) story of how she lost her virginity at the age of 13 to her brother’s 21-year-old best friend, she is clearly playing into a male fantasy that she believes to be of exploitable ubiquity. But, while the film is precise in its execution, it is less so in its answers. It is left largely up to the audience to decide exactly where the problem lies (or if there truly is one), be it in the consumers or the manufacturers, or if it’s simply an inherent part of human nature that’s getting an outlet in the form of this role-playing.Outside of the three aforementioned, dialogue-heavy scenes, the film is nearly wordless, employing cold, static visuals to portray solitary existences for both Eve and obsessive fanboy Adam. Their day-to-day lives are exhibited with such little human warmth that the sense of touch becomes closely associated with the uncomfortable groping in Eve’s interviews, rendering even the sight and sound of hands stroking some bedsheets slightly disconcerting in nature. Meanwhile, with a handgun and a camcorder at the ready wherever he goes, Adam (assuming that’s his real name) gives off something of a Travis Bickle vibe that makes one anxiously wonder what he might be capable of. He becomes increasingly daring in his stalking of Eve, filming the actress in her private, sans-persona moments and later directly confronting her on the sexual acts she claims to love.It’s imperative to the taut, sterile, emotionally suppressed atmosphere that the tension never entirely bubbles over, ending the film with an inspired riddle – an ambiguous flash of insight – rather than a definitive resolution. In both style and substance, After Eden is a film about a system so reliant on predictable patterns and repetitions – from the audience relying on their porn actors for the same wish fulfilment pageantry, to the producers and performers relying on their audience wanting these same fantasies – that anything unexpected is an innate revelation and perhaps even a glimpse of humanity amidst the stiff formality.
Like this Review?
Write your own review?
DooVOTE
Not for me
Like this Review?
Write your own review?
COMMENTS 0
Your Comment...