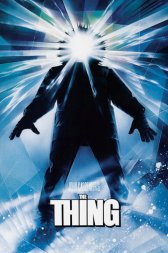 The Thing
Canada, USA, 1982, 109 minutes Horror, Mystery, Science Fiction, Thriller
Twelve men stranded in an Antarctic Station, with no communication with the outside world, sounds like the starting to a new reality show. Possibly the next step to “I am a Celebrity, Get me out of here.” But really it’s the premise to John Carpenter’s 1982 film, “The Thing”. Starring Kurt Russell, a parasitic Alien attacks the crew at the station and has the ability to take control of the host body. The men are then thrown in a situation where they cannot trust anyone and have to try and root out the Parasite. Madness.

The film matches the remote isolation of the Station to the deep drumming of the score to create a suspense filled atmosphere where the audience are at the mercy of the character’s techniques in finding out which body the parasite has control over.

The imaginative special effects used really adds to the terror created by the film, and the parasitic Alien in my opinion is one of the most explosive and creative beings to invade the screen.

What really stands out is the immersive nature of the panic that takes hold of the characters, where you find yourself guessing who the Parasite has taken control of. The Thing cemented John Carpenter’s role in science fiction and the film received cult status, which led to a prequel in 2011.
Like this Review?
Write your own review?
DooVOTE
Not for me
Like this Review?
Write your own review?
COMMENTS 0
Your Comment...