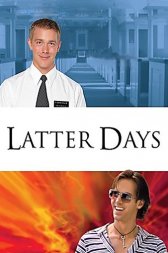 Latter Days
USA, 2003, 107 minutes, HD Comedy, Romance, LGBT, US Indie
There are few gay films that approach the topic of religion without taking the viewer through several circuits in Hell.  As it goes, this does too.  But, and it's a very big but, this film also gives us a little glimpse of Heaven.Overall the acting is strong and the characters real and likeable.  You sense they have a backstory.  They may not be you, but you believe they are themselves.  In terms of all the technical stuff, this film is up there with the best of the indie cinema.Where this film excels is in its ability to really capture the something of the essence of what it means to be religious, gay and, to use a word I'm not too fond of, conflicted.  My first degree was in Theology.  In many ways I was a version of the geeky pious Mormon.  Unfortunately I wasn't quite as handsome.  Like many, I probably watch films for autobiographical reasons.  What can this film tell me about me?   What can this film reveal about the world I live in?If you've been religious, if you've struggled to reconcile your faith with your sexuality, then this film is really for you.  If you've never been there or done that, then it might tell you a thing or two about people you know.If this film annoys you and leaves you dissatisfied, park it.  Let it rest.  Then watch it again.  That's what I did and I'm glad I did.
Like this Review?
Write your own review?
Add to List
Not for me
Like this Review?
Write your own review?
COMMENTS 1
Your Comment...
LIKES 3
MaeMaeDecena
blacksnakemoan
MS2171jp
MaeMaeDecena
blacksnakemoan
MS2171jp