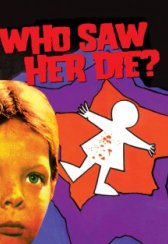 Who Saw Her Die?
Italy, 1972, 90 minutes, HD Mystery, Giallo, Horror, Thriller
Aldo Lado is surely one of the most under-rated Italian directors of the 70's. He seems to be relatively forgotten, while several lesser contemporaries get a lot more attention. But whatever the case, Lado was responsible for three excellent horror/thrillers in the mid-70's. There was the nasty revenge thriller Night Train Murders (1975) and a couple of gialli - the Prague-set Short Night of the Glass Dolls (1971) and the Venice-set Who Saw Her Die? All films were very distinct from one and other and all had considerable style to burn.

Who Saw Her Die? is the one which follows the classic style formula of the giallo most closely. In it a serial killer is on the prowl in Venice. Like Nicholas Roeg's Don't Look Now (1973), this one used the crumbling streets of that famous ancient city to great creepy effect. It begins, however, in the French Alps with a nicely atmospheric prologue in which a young child is killed by a black-veiled killer in the snowy expanses. This villain is a very good one and is presented throughout the movie in a very sinister manner indeed, with close-up shots of their shoes as they menacingly advance toward their victims and shots of their obscured veiled face. Additionally this character is accompanied by an absolutely rivetingly creepy Ennio Morricone theme which is a controlled cacophony of a children's choir over a steady beat. It's one of his most memorable individual bits of music and that's saying a lot considering the sheer volume and quality of Il Maestro's output. The cast is solid with George Lazenby appearing in his first starring role following his solitary turn as James Bond in the under-valued On Her Majesty's Secret Service; while he is ably supported by genre regular's such as Anita Strindberg (The Case of the Scorpion's Tail (1971)) and Adolfo Celi (Danger: Diabolik (1968)).

As far as I am concerned, this is an excellent giallo by one of the most reliable Italian directors from the period. It works well as a pretty intriguing mystery, while it delivers the requisite vicarious thrills too. And most importantly it presents these things with a healthy slice of style and verve. Well worth seeing…!
Like this Review?
Write your own review?
DooVOTE
Not for me
Like this Review?
Write your own review?
COMMENTS 0
Your Comment...
LIKES 1
blacksnakemoan
blacksnakemoan