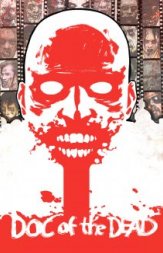 Doc of the Dead
USA, 2014, 77 minutes, SD Documentary, Horror
In the last decade or so zombies have left the underground and become mainstream. It's a somewhat strange state of affairs and one that this documentary tries to explain. It looks at zombies in two main ways – their evolution in the movies and their appearance in recent culture. The film history part is the more interesting. It looks at the old style somnambulist zombies of the 30's and 40's typified by the likes of White Zombie (1932), through to the more modern incarnation invented by George A. Romero with The Night of the Living Dead (1968). It would only be fair to say that this latter film is truly the year zero in how the vast majority of people in western culture understand zombies, i.e. shambling, rotting, flesh-eating ghouls who attack humans at every given opportunity and can only be killed by a bullet in the head. The old-style Haitian type of zombie is much less seen these days, nor the Japanese variant which…hops! No, its Romero all the way these days, which is what makes it rather a strange phenomenon to become embraced by mainstream culture considering how grotesque and frightening his concept for the living dead actually is. While the film history part is the strongest it doesn't have time to reference a lot of the most loved entries in the genre, particularly the work of Italian director Lucio Fulci. But the reason is simply that the focus is on the zombie idea in general and not just on the movies and there simply isn't time.

It did lose steam a bit once it leaves the film history side of things though and moved onto the wider cultural impact. It becomes a bit bitty and spends time looking at aspects that aren't terribly interesting. Not only that but, a very brief passing reference aside, it inexplicably fails to focus on the one true moment when the zombie truly tapped into mainstream culture, namely Michael Jackson's Thriller video. Chronologically it's all over the place and there isn't a feeling of understanding the progression from how we really got from NOTLD to the recent craze for zombie walks. I don't really believe in the assertion that it's to do with the September the 11th terrorist attacks which was suggested. But, whatever the case, the documentary does show that zombies really are everywhere now. It is a fun, if flawed, film. There are several very funny moments too. But unlike the undead themselves, it doesn't have a single purpose it relentlessly pursues and instead kind of splits its focus too much.
Like this Review?
Write your own review?
DooVOTE
Not for me
Like this Review?
Write your own review?
COMMENTS 2
Your Comment...
LIKES 1
blacksnakemoan
blacksnakemoan