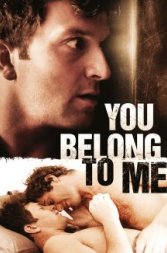 You Belong to Me
USA, 2007, 82 minutes, SD Thriller, LGBT, US Indie
I didn't quite know what to expect from this movie, you dont get many gay thrillers so I wasn't sure if this one was going to pull off, but it certainly did! The build up is tense and chilling at times. The film starts with Jeffrey in bed with his hot French one night stand, but when the French guy breaks it off, Jeffery decides to stalk him, eventually finding out where he lives and promptly moving in! At first we think that it is Jeffrey who is a little mentally unhinged, his obsession with the beautiful Frenchman Rene being rather worrying, but as it turns out, his new landlady is a complete fruitcake who wants to keep Jeffery trapped in the apartment forever! That was the first of many twists I didnt see coming. Another highlight is Jeffery's sassy housemate Vicki, whose character delivers the film's funniest lines, adding welcome relief between the scares. Its not surprising that this was nominated for a Tarantino scriptwriting award, it keeps you on the edge of your seat more than once. Great to see Patti D'Arbanville (Bilitis, Flesh) causing mischief again.
Like this Review?
Write your own review?
DooVOTE
Not for me
Like this Review?
Write your own review?
COMMENTS 0
Your Comment...