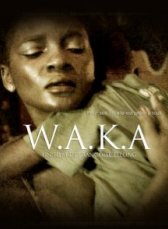 W.A.K.A.
Cameroon, 2015, 97 minutes, HD Drama, African, Arthouse
Pulsing with nocturnal gloom and propelled by tragic inevitability, W.A.K.A., the powerful feature-length debut of Francoise Ellong, is a small-scale film that deals in big emotions. Its story of a young woman’s self-sacrificing struggle to raise her child is told with a pervading sadness that piercingly undermines even many of the potentially uplifting sequences of the film. Glimmers of hope are reduced to painful reminders of the life that the resilient Mathilde cannot have. The only question that remains is whether her son Adam’s future will be any different.

The harsh environment which Mathilde must navigate is made clear in her introductory scene, which sees her bluntly fired from her waitressing job as a result of her pregnancy. After a passing stranger talks her out of a suicide attempt, she resolves to keep the baby and take on the daunting task of caring for the newborn Adam herself. With prostitution being the only viable job opportunity, she agrees to work for a sinister, manipulative pimp who gives her a wig and a new name, Marilyn, and sends her into the streets.

Time moves at an alarming rate in W.A.K.A. As the years slip by, Mathilde regrettably misses much of her son’s childhood while she becomes increasingly immersed in her assigned identity as Marilyn, showing progressively more self-possession in her position. The film finds conflict in the relation between her life as a mother and her persona as a prostitute, with the latter threatening to swallow up the former. Despite her attempts to keep the two parts of her life separate, the influence that Mathilde’s shady occupation bears upon Adam is apparent but, worse still, there’s an ongoing risk that her dubious associations will put them both in danger. Mathilde’s hazardous profession is presented as a necessary means to an end but the dream of escape remains a distant fantasy as the dealings of the night begin to envelop her existence.

The weighty narrative and the soundtrack’s occasional slips into heavy-handedness risk turning the film into a depressing slog but the story is directed and edited with an engaging vibrancy. The rich tone is strengthened by Thomas Moren’s luminous cinematography which adds a layer of wistful romanticism to the drama, while Patricia Bakalack’s distressingly double-edged lead performance skilfully ties the film together.

W.A.K.A. is a film about two people forced to fend for themselves in an impersonal, indifferent environment but there’s a constant underlying implication that the sad story it tells is just one of many. It doesn’t seem incidental that the film more generally serves as a tribute to anyone trapped by circumstance and pushed into a life of subjugation and disrepute. Mathilde surrenders her identity, security and pride for the sake of a loved one but her selfless drive and persistence is ultimately met with appreciation, both in the child she does her best to nurture and in the audience absorbed in her humble undertaking.
Like this Review?
Write your own review?
Add to List
Not for me
Like this Review?
Write your own review?
COMMENTS 0
Your Comment...
LIKES 4
sandragrey
blacksnakemoan
snakeeyes
MaeMaeDecena
sandragrey
blacksnakemoan
snakeeyes
MaeMaeDecena