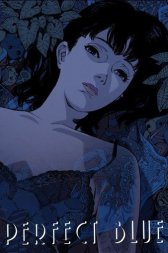 Perfect Blue
Japan, 1997, 81 minutes Animation, Thriller, Anime
As the late Satoshi Kon's first feature, Perfect Blue showcases many of the styles he would incorporate into his later films, particularly that of the subconscious, the blur and perceptions of reality and illusion (which could be dreams) and relevant issues on the current state of Japan. The film's editing and cinematography takes a very subjective approach, with the broken editing which tends to trick us into thinking about where we are and what we are experiencing. At many points we cut to a scene which we think is real life, but it's revealed to be either a dream that Mima has, or a scene from the television drama that she is acting in. It works to reflect on how our main character feels, as she begins to lose grasp or reality and of herself, and even the audience begins to question what is real or not. Perfect Blue tackles the issue of pop idol sensations in Japan, which relates to the idea of creating an illusion. As we explore the world of television dramas, the film comments on how the entertainment industry in general capitalises on stars. Although Mima wants to become an actress, she is nonetheless continuing to create an illusion, except this time it goes almost against the image she was told she needed to fulfil in the past. Being a little more obsessed with straying away from her more "girly and innocent" persona as a pop idol, she even actually goes along with the idea of filming a rape scene, which is something very extreme, but something she feels she needs to create this new persona. But the transition into an actress turns out to be something very destructive for herself, as figments of her old pop idol self being to haunt her. It offers an insight into the dangers of stardom, as once you become famous, you might not be in control over your own identity: it might belong to either the entertainment industry or the fans themselves.
We can see how Darren Aronofsky had taken influence from this film, having borrowed the bath shot for his film Requiem for a Dream, which he had to acquire the permission to use, and using this film as a reference point for his film Black Swan (some even seeing this as a remake).
Although the technology of computers and the Internet make the film feel a bit dated, the story itself is actually much more relevant today: with the advances of the Internet age and social media cutting us out from real experiences, and celebrity culture making us obsess over the image of that person without having actually met that him or her, whether positively or negatively. Perfect Blue also may have focused on the music and television industry, but I'm sure it also meant to reflect media and entertainment in general, with the advent of the internet, and how we begin to lose ourselves in those images by obsessing over them and living in a certain fantasy.
Like this Review?
Write your own review?
DooVOTE
Not for me
Like this Review?
Write your own review?
COMMENTS 2
Your Comment...
LIKES 1
blacksnakemoan
blacksnakemoan