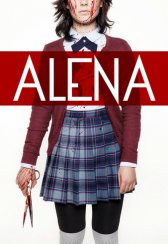 Alena
Sweden, 2015, 83 minutes Horror, Coming of Age
Anyone who remembers Kimberly Peirce’s 2013 Carrie remake (and I wouldn’t blame you if you didn’t) will be wary of how easily female-centric troubled teen horror dramas can slip into ‘issues movie’ blandness. So when a clear descendent of Bran De Palma’s masterful original bucks the trend with a helping of personality to back up its sense of tragedy, it shouldn’t be taken for granted. Alena, the debut feature from Swedish director Daniel di Grado, may not always get the balance of the various facets of its identity quite right but it nonetheless impresses as a sharp and sincere depiction of high school sociology, adolescent anguish and mental instability.

Alena herself is an introverted misfit just starting at a high-class boarding school following unspecified issues at her previous establishment. It isn’t long before she starts attracting the attentions of the cruel, stuck up Filippa and her eager associates who make it their mission to render Alena’s educational experience as unpleasant as possible. Alena finds some escapist rebellion in her encounters with an old friend named Josefin, a moody and antisocial type, but it quickly becomes apparent that Josefin may just be a little too attached to her former schoolmate. This mysterious character is seen reaping harsh vengeance on Alena’s wrongdoers or anyone Josefin feels threatens their relationship.

Despite some degree of retribution in Josefin’s acts, Alena’s friendship with her is unequivocally self-destructive. Alena is a highly removed character who often lets other people speak for her but, as portrayed by Amalia Holm, she can reveal psychological disturbances active below the surface with just the manic twitching of her eyelids. Her ties with an increasingly unpleasant Josefin serve as an outward expression of the intense, guilt-ridden memories that won’t let her move on from an unfortunate past.

One fellow high schooler who’s less reticent about her sorrows, however, is the surprisingly interesting Filippa. A spoiled brat who believes she has the cunning and leverage to talk her way out any situation, Filippa’s character arc often overshadows Alena’s as we see her gradually cut down to size. It’s written in the genre rulebook that this self-centred individual will get her comeuppance by the ending credits but, along the way, some of the film’s most intriguing and entertaining moments come in the sections where she can feel herself slipping from her school’s top rung. The inevitable third act scene of Filippa triumphantly ‘exposing’ Alena’s sad personal history is particularly affecting. Narrative formality is refreshingly subverted as Filippa’s vitriol is seen to do far more social harm to herself than her target. The high school bully just might be the dullest of all teen flick clichés so it’s always worth celebrating when this trope is manifested in a character that doesn’t seem to be in autopilot.

It’s a shame that the film generally isn’t quite so inspired when it strays from this adolescent drama to engage in full-on fright mode. One jarringly gruesome scene at the picture’s midpoint particularly grates as a hackneyed sequence of sexy-scary artsploitation in a film that otherwise sees Daniel di Grado succeed in presenting a convincingly sympathetic depiction of this schoolgirl-dominated environment. Besides, the power plays and sexual humiliations of the high school ecosystem are disturbing enough. Alena engages primarily through its quirkily humorous portrayal of a parentless society running on mob rule where teenagers are pitched against each other and any weaknesses are sought out and exploited. Whether it’s Filippa realising that her place in the hierarchy is less secure than she thought or Alena finding that her mental hang-ups are beyond desertion, di Grado’s boarding school is a place where insecurities and anxieties find outlets in some of our worst instincts.
Like this Review?
Write your own review?
DooVOTE
Not for me
Like this Review?
Write your own review?
COMMENTS 0
Your Comment...