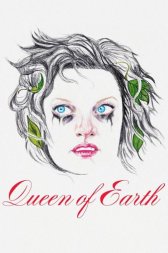 Queen of Earth
USA, 2015, 90 minutes Drama
Elisabeth Moss and Katherine Waterston only met four days before starting shooting the film... Probably even for the better as their relationship and exchanges in the film are so spontaneous and complex. Truly great actresses, especially for Katherine Waterston, that Hollywood tends to forget. In a film that we can finally call US Indie for once (shot in 12 days with small crew), Queen of Earth sets up a certain ambiance through the music, dialogues and long takes. A 7 minutes sequence of the girls' 2 monologues is particularly impressive and so is my favourite scene, a long ping-pong conversation with a top-notch passive aggressive style (those are always my favourite when perfectly written). Alex Ross Perry does not always convince me (wasn't a big fan of Listen Up Philip), but I find the approach he had with Queen of Earth to be very simple and direct, while dealing with such complex topics as friendship and psychological problems. I watched the film at the London FIlm Festival and recommend it!
Like this Review?
Write your own review?
DooVOTE
Not for me
Like this Review?
Write your own review?
COMMENTS 0
Your Comment...
LIKES 1
blacksnakemoan
blacksnakemoan