Image from: The Secret World of Arrietty (2010) 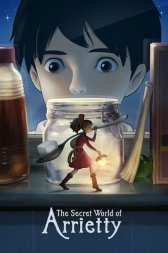 The Secret World of Arrietty
Japan, 2010, 94 minutes Fantasy, Animation, Family, Anime, Childrens
The Secret World of Arrietty follows a slice-of-life tone like Totoro and Kiki's, and it’s remarkable how films like these manage to feel grand simultaneously, especially when this film is about small people. The animation complements this aspect, as we see the world through the perspective of the Borrowers, with us noticing details and textures in items that we otherwise wouldn’t notice with normal eyes (like the detail of a textile on the wall). I love to see how the little people get around the house, how their contraptions work, how they get through hidden doors, etc. The film constructs something that feels normal to us into a big landscape: in one scene, it’s both intriguing and suspenseful to see how the characters get across a kitchen and a bedroom, where they need to be as quiet and as stealthy as possible and creatively use small items to get through places. It makes the audience feel like they are themselves small, and that you really don't want to get caught. I also love the music: normally Joe Hisaishi composes the music for Ghibli films, but this time they hired Cécil Corbel, which gives the film a more Celtic feel, expressing a small sincerity, but also the right amount of grandeur.

These elements work for a story about a small girl living exploring the wonder and grandness of the world around her, in a place we’d normally see as mundane. But it’s not just a story about wonder. It’s also about hope. In one scene, Sho talks about his illness and how it makes him feel so small in the world, almost like he’s come to terms with his death: it’s so fitting that he tells this to Arrietty herself, because she is literally small. Her journey is all one powerful metaphor that ties in with him. Arrietty and her family must hope that they aren’t the only Borrowers left on earth, and Sho needs to believe in the chance that he would survive the surgery that either might or might not save him. Strangely enough, the ambiguous ending did bother some people when they saw it, since we were left with unopened answers. That I think was something that worked in this film, because now the characters are left with something to strive for, no matter what the outcome may be. And the point is that while they can expect bad things to happen, we want to believe in the best of their goals.

This is definitely worth a watch, though if you are going to watch an English dub, I had seen both the US and the UK version and I personally prefer the US dub. I just felt that, for some reason, none of the British voices fit any of the characters, but that’s also a matter of taste (and maybe I’m more used to the American accent, but I know when the British accent fits a character).
Like this Review?
Write your own review?
DooVOTE
Not for me
Like this Review?
Write your own review?
COMMENTS 0
Your Comment...
LIKES 1
MaeMaeDecena
MaeMaeDecena