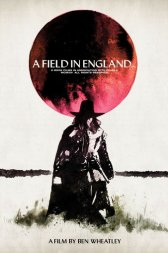 A Field in England
UK, 2013, 90 minutes, HD Drama, History, Thriller, Supernatural
How would one label “A Field in England”? A horror? A fantasy? A farce? The most common term I’ve seen floating around is that Ben Wheatley’s latest is a “drug movie”. I ask – how far does a film need to go in order to stop simply being a “drug movie” and start being a depiction of a waking nightmare? “A Field in England” follows a group of English Civil War soldiers who wander away from battle into the titular ominous field, where they are enslaved by a mysterious supernatural figure in search for… something.

You see, “A Field in England” is brilliant. It looks amazing, the dialogue is fabulous and the tone flawless. It also happens to be nigh-on impenetrable, weaving a story that is so layered and rich with meaning that it totally eschews conventional storytelling. In truth, not all that much necessarily happens in “A Field in England” – on the surface, at least. Though then again, this is not a film intended to be viewed for it’s surface-value. Everything about the film is grim, farcical and absurdist in nature, making it far more akin to plays like Waiting for Godot or Rosencrantz and Guildenstern Are Dead than any film in recent memory.

Ben Wheatley has an absolutely unmistakable style that, along with Paul Thomas Anderson, makes him a strong contender for the next Kubrick – aesthetically speaking, at least. The film is beautifully shot, to the point where I was sure it was on 35mm as opposed to digital. Each black and white frame is expertly staged, and the visual creativity involved in the latter half of the film is staggering. The music also does an excellent job of creating an uncertain, dark and captivating atmosphere.

“A Field in England” is a film that will baffle you, but it will also burn itself into your memory, repeating it’s frames when you close your eyes and it’s cackles in the silence.