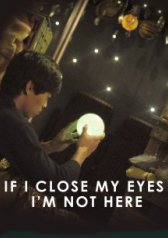 If I Close My Eyes I'm Not Here
Italy, 2014, 110 minutes, HD Asian, Coming of Age
This film has been critically acclaimed and this site seems to be the only one (AFAIK) which is streaming it when it was released on the 31st August. I took the plunge and rented it.
Essentially, this film centres around Kiko, Pilipino in origin but growing up in Italy. After the sudden death of his father , he is juggling school work and being forced to work in his mothers new boyfriends business. He is failing at school and often seeks refuge at a bus he has converted which has tender memories of his late father in it. A chance meeting with a "friend" of his late father seems to turn his life around. His new mentor helps him with his schooling and his grades improve. The shock revelation (which I won't disclose) from his mentor turns his life upside down. I won't reveal anymore as it is a film that needs to be watched as there are nuances and double entendre's that really make the viewer think. Parts of the film I was able to resonate with and I think the director done this well since it evoked emotions in me that had been dormant for a while. I only gave this 4.5 stars as it is a slow burner (you'll need to concentrate), and sometimes the subtitles were difficult to read. Worth renting and this seems to be exclusive (AFAIK) to Filmdoo.
Like this Review?
Write your own review?
DooVOTE
Not for me
Like this Review?
Write your own review?
COMMENTS 2
Your Comment...
LIKES 4
ClaudineC
lenidecastro
blacksnakemoan
MaeMaeDecena
ClaudineC
lenidecastro
blacksnakemoan
MaeMaeDecena