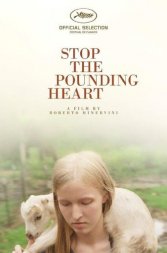 Stop the Pounding Heart
USA, 2013, 101 minutes, HD Documentary, US Indie, Arthouse
There was once a time where it was hard to find a cinematic vision of the American rural south that wasn’t highly romanticised. These days the challenge is in finding one that isn’t vehemently condescending. So it’s heavily to the credit of director Roberto Minervini that his latest release doesn’t fall into either camp, presenting the rodeo cowboys and religious fundamentalists of Stop the Pounding Heart with clear eyed respect, even when he doesn’t subscribe to their points of view. These aren’t caricatures but flawed, thoughtful, ever-growing people. This restraint on Minervini’s part allows us to appreciate the moral, societal and psychological factors of the young Sara’s dilemma without ever feeling like the director is poking us in the eye with his opinions. The film succeeds because it strives for empathy over crowd-baiting ‘importance’.

That’s why it’s key to Stop the Pounding Heart that it takes the time to establish its setting before it begins to clarify its central narrative conflict. Before Sara even meets amateur bull rider Colby, we’re treated to ten minutes of Sara working at her family’s goat farm and engaging in parent-enforced Bible study so we know the hefty implications when Sara starts feeling lustful thoughts for the boy. Those expecting a typical forbidden screen romance to follow will no doubt be taken aback (or thoroughly bored) by how little actually happens. Sara’s story isn’t about what she does but what she wants to do as she spends the film quietly wrestling with her own thought crimes.

‘Quiet’ is a word that applies almost across the board for this film in a way that feels true to both its setting and its characters. This is a place where emotions are constantly reigned in, whether it’s behind a wall of traditional masculinity or in the name of meek, dignified, subservient femininity. This inner struggle takes inspiring physical form in the bull riding sequences, from the erotically evocative scenes of boys riding a rodeo simulator to the furious footage of the real thing. Sara, likewise, is having to stay on top of her own feelings and Minervini keeps track of her and the rest of the cast’s inner workings with admirable self-control. Usually letting the natural locations speak for themselves, the film’s surfaces are so pretty that it’s easy to miss how much is going on just below them. The director may fill each frame with richly textured, often somewhat biblical imagery but he always keeps the focus on the human face since that is where most of the story is being told.

It’s this prioritisation of the human element that allows Minervini to sneak his own personal response into the mix without intruding on the unusually organic atmosphere. While he may often dislike what he sees, he doesn’t judge or demonise. There’s no ignoring the wire fences that are shot looming around Sara or the film’s resentment towards her abstinence ring but the essence of Minervini’s work comes through most effectively in Sara’s tired eyes. If Stop the Pounding Heart is about gender roles, emotional repression and moral puritanism, it’s because these are all real things which tie into the protagonist’s situation – and not just because the film says so.
Like this Review?
Write your own review?
DooVOTE
Not for me
Like this Review?
Write your own review?
COMMENTS 0
Your Comment...
LIKES 1
MaeMaeDecena
MaeMaeDecena