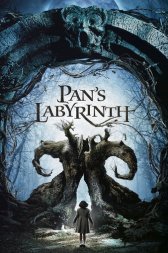 Pan's Labyrinth
Spain, Mexico, 2006, 118 minutes Fantasy, Science Fiction, War
Guillermo del Toro's mysterious film flits extraordinarily between two distinct worlds which seem more and more similar as time passes. One is the brutal and devastating reality that is the Spanish Civil War. The other is the magical but not any less grim subterranean world full of strange beasts and creatures. The bridge between these two worlds is the curious mind of little Ophelia (Ivana Baquero) who takes us by the hand and leads us into the realm of her imagination. Or is it, in fact, all real? This is not the only question that the film leaves unanswered (that odd, imperious fawn- friend or foe?). This is a fairytale but one that is far from Disney's adaptations. Ambiguous and brutal, it is not for the faint-hearted and one of it's greatest merits is it's transfixing aesthetics.
Like this Review?
Write your own review?
DooVOTE
Not for me
Like this Review?
Write your own review?
COMMENTS 1
Your Comment...
LIKES 1
MaeMaeDecena
MaeMaeDecena