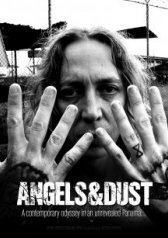 Angels & Dust
Panama, 2014, 78 minutes, SD Documentary, Crime
A dizzying, almost unbelievable documentary set amidst the bedlam of Panama's streets, gang culture and debilitating problems with drugs. As cocaine ruins the country, Mauricio arrives in Panama in order to help his brother and sister-in-law; Paco and Kene respectively. Imprisoned due to smuggling, the desperation all three characters face is manifested in different ways throughout Hector Herrera's documentary. Panama City is made to appear no different from the prisons itself as Mauricio finds himself at the mercy of the cities underworld. Tense, informative and somewhat frightening, Angels and Dust is a documentary for those who are curious about the lesser reported on parts of the world.
Like this Review?
Write your own review?
DooVOTE
Not for me
Like this Review?
Write your own review?
COMMENTS 0
Your Comment...