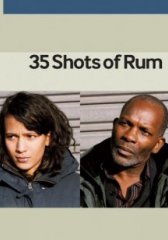 35 Shots of Rum
France, 2008, 100 minutes, SD Drama, Arthouse
When watching Claire Denis’ 35 Shots of Rum, you could be forgiven for forgetting you were ever watching a film at some points such is its understated subtlety, effortless on screen acting and sheer realist tendencies. Denis, working once more with frequent collaborators Agnes Godard and The Tindersticks, takes us right to heart of a father daughter relationship, situated in the Parisian suburbs. Lionel (Alex Descas), a widowed yet proud father enjoys a loving, if not occasionally fraught relationship with his studious daughter Josephine (Mati Diop). Despite their obviously deep affectionate feelings for one another, Lionel knows that eventual separatism from his daughter is essential if she is to further her life in the way that both Lionel and Josephine want. Amidst the main theme of the bond between father and daughter, Denis uses this special relationship to explore further themes of both loneliness and absence.

Aside from Josephine and Lionel, 35 Shots of Rum also features a strongly performed yet small group of supporting characters. Gabrielle (Nicole Dogue), seemingly the loneliest of the characters, works a taxi driver and lusts to be the mother Josephine no longer has and the lover Lionel has lost. Noe (Gregoire Colin) plays the cavalier yet tempestuously moody Noe, who much to Lionel’s concerns, clearly has feelings of desire for Josephine. Suffering his own loneliness at the hands of his parent’s death, Noe, Lionel, Josephine and Gabrielle are explicably linked through their own histories of loss. In dealing with such a theme, Denis uses 35 Shots of Rum to explore the effects such a feeling has on a small group of individuals with true cinematic dexterity.

Denis’ script is simple yet effective, whilst Agnes Godard’s ability to capture life’s everyday banalities compliment Denis’ film wholeheartedly. Real life, is at times, this slow, this uneventful, yet in adhering to this notion within her film, the relationship between Lionel and Josephine becomes entirely believable, ultimately making their impending growing apart that bit more emotionally charged. Furthermore, Denis also weaves the themes evident throughout her film into every facet of her characters livelihoods. Each of Lionel and Gabrielle’s avenues of employment are as drivers, Lionel of a train and Gabrielle of a taxi. Josephine, when not studying is either tirelessly cleaning her house or working at a music shop, yet throughout 35 Shots of Rum we rarely see her interact with others other than that of her father, Gabrielle or Noe. Noe, whose career ventures seem rather illusive, compounds his loneliness through his sheer inability to truly divulge how he feels or where his life is taking him. Perhaps the relationship between these characters and their respective loneliness is Denis creating a wider polemic upon the plight of those who are descendants of France’s colonialist past. Previous films from Denis show a tendency to focus her film on pockets of France’s diaspora communities and 35 Shots of Rum is no different, yet by doing so, Denis taps into already established themes of detachment.

Prior interviews with Claire Denis have seen the director speak of her interest in depicting ‘[…] individuals and how they respond to challenges or to difficulties, or just to each other […]’ and 35 Shots of Rum certainly echoes such an ethos. As the viewer we are granted a look into a particular period of a group of individuals life’s in which the on screen chemistry of its cast, established aesthetics and natural scripting make it a poignant yet intimate portrayal of struggles families often face.