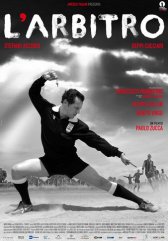 The Referee / L'arbitro
Italy, 2013, 96 minutes Comedy, Sport
Paolo Zucca, the director and writer of the film, uses football as a sport, football as a passion and football as an exercise for real life to tell the audience something more about Italians.

Suddenly, it is like seeing two faces of the same coin in black and white. From one side, we have life and,in particular, the development of the career of the referee Cruciani (Stefano Accorsi) and then, Zucca is very good at showing that the football world can be something very different from what we see on TV.

He brings us into the deep of the godforsaken Sardinia and he introduces us to the rivalry between two local football teams: Montecrastu and Atletico Pabarile (difficult to pronounce even for an Italian).

Through football, the director has been able to describe the two faces of Italy, the wealthy part and the poor one, still angry and ready to take revenge if someone steals and kills a goat. Yes, I said «goat».

In a mixture of corruption, farm animals, football stadiums, love and strange and absurd characters (for instance, the coach of Altletico Pabarese is blind) we find ourselves laughing in many moments. Funny at the beginning, but as the film moves on, the smile turns bittersweet.

In the end, I found myself thinking “How far is all this from reality?”, and my smile became half a smile. Still, this is Italy, which may well be the greatest comedy of all.