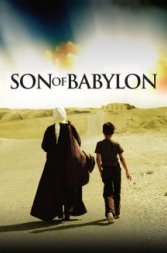 Son of Babylon
Iraq, 2010, 100 minutes, SD Drama, Coming of Age, Arthouse
A movie that will most definitely make you think!. I can not say it is the most perfectly shot film I've ever seen, yet it made me feel for the boy.
Son of Babylon was Iraq's official entry for the Best Foreign Language Film in 2010. Even though it wasn't nominated, the film is made with sincerity and emotional power that will appeal to anyone no matter their country or religion.
Son of Babylon"is set in 2003, just three weeks after the fall of Saddam Hussein's regime. The film follows a long cross-country journey of a Kurdish grandmother and her grandson Ahmed . With Ahmed grudgingly obliging, the grandmother is determined to find her missing son (and Ahmed's father), who went to the Gulf War and has not returned since then. The only clue he has got is a letter from his son's friend, telling that Ahmed's father was spotted in a prison in Iraq's southern city of Nasiriyah.
Like this Review?
Write your own review?
DooVOTE
Not for me
Like this Review?
Write your own review?
COMMENTS 0
Your Comment...
LIKES 1
MaeMaeDecena
MaeMaeDecena