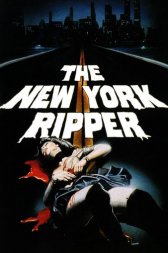 The New York Ripper
Italy, USA, 1982, 93 minutes, HD Horror, Giallo, Slasher
Of the many talented directors to work in the heyday of Italian horror, none are more widely beloved and maligned than Lucio Fulci. A filmmaker who unabashedly worked in B-movie territory, his crude but effective spectacles earned him a cult following, even while they were decried as poorly plotted and excessively gory. Banned from UK cinemas in 1982, The New York Ripper, Fulci’s late period contribution to the horror-infused murder mystery genre of giallo, is easily one of the filmmaker’s most controversial works. To say it won’t be to everyone’s taste would be an understatement but if you have a penchant for sleaze then this could be right up your dark, squalid alley.

The film’s divisive nature begins with its plot, which is either welcomingly familiar or tired and formulaic, depending on your predisposition to this sector of genre cinema. Jack Hedley stars as Lieutenant Fred Williams, the hard-mannered detective assigned to track down the sadistic, perverted psycho who’s been gruesomely murdering women in New York while disguising his or her voice with a mockingly cartoonish duck impression. As the body count increases and red herrings come pouring in from all sides, the killer becomes increasingly bold in their random acts of mutilation.

Fulci does all in his power to make New York feel like the optimal scuzz-pit to accommodate such evil. It’s a city of abrasive indifference, where even our hero Williams approaches the killings with an air of callous, even amused detachment until they start hitting closer to home. A couple of the killer’s choices of victim explicitly evoke extreme slut-shaming but perhaps the film’s most disturbing scene contains no bloodshed, only a woman being sexually humiliated in a seedy bar. You could argue that Fulci is expressing the ugly, misogynistic underbelly of the city or merely expressing the more hateful parts of his own psyche but, either way, it makes for engrossingly uncomfortable viewing.

The director makes creative choices throughout the film that many will find objectionable but one thing that no one can take away from Fulci is his ability to film a good suspense sequence. The camera uses close-ups on faces and reflections in doorknobs and windows to dreamy effect, while the fast editing and threatening zoom-ins create a sense of urgency that complements the claustrophobic streets and buildings where some of the best scenes occur. The film may lose some of its momentum in the dialogue-based scenes between such highlights but the intense set pieces are delivered with sufficient regularity and skill to retain your interest through the slow spots.


To call a picture a good exploitation flick sounds like a backhanded compliment but even this oft-ridiculed category of film is one which can either be done well or done badly. Plenty of viewers will be unable to get past the performances and the dubbing, both of which are undoubtedly pretty unimpressive on the whole. But to other, more nostalgic grindhouse fans, these technical shortcomings will hold their own retro charm. It’s not so much a matter of needing to lower your standards in order to enjoy the film as it is a matter of learning to appreciate the raw bluntness in the delivery of its thrills. When someone buys, downloads or rents a low-budget, straight-to-video slasher flick with an attention-grabbing title, The New York Ripper is the film that they’re hoping to see but almost never do. It’s not fine art but it’s good honest trash – and that’s something that’s harder to come by than many will admit.
Like this Review?
Write your own review?
DooVOTE
Not for me
Like this Review?
Write your own review?
COMMENTS 0
Your Comment...