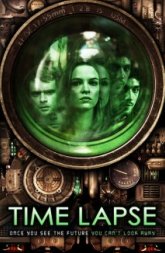 Time Lapse
USA, 2014, 104 minutes, HD Science Fiction, Thriller, US Indie
Time Lapse, the multiple award-winning directorial feature-length debut of Bradley King, is a film that flat-out gets time travel. That is to say, the film understands the various facets and complexities of this familiar sci-fi concept – the questions the technology would raise, the endless ripple effects it would create and, above all, its capacity to inspire mind-bending and unpredictable story-telling. Rather than shying away from or skimming over the ambiguities and potential paradoxes that a distorted timeline can create, King uses these overwhelming complications as the driving force behind his psychologically disruptive drama. With its Shallow Grave-esque narrative, Time Lapse is a tense thriller of paranoid minds and secret strategising but it’s also a film of deceptive richness that excites us with ideas. Mixing left-brained intricacy with bracing immediacy and resonant emotion, the film seems to have all the right ingredients to achieve a deserved cult status.

The film follows three roommates whose lives are in various states of immobility. Finn (Matt O’Leary) is an aspiring painter currently suffering from a creative block. When he isn’t working his day job, Finn expends his time staring at a blank canvas, thinking about what he could potentially create while he ignores his girlfriend, Callie (Danielle Panabaker), who in turn worries that their relationship isn’t moving forward due to Finn’s lack of engagement. Meanwhile, wildcard of the trio Jasper (George Finn) spends his free time investing in potential easy money by making and losing racing bets. But when an unusual death befalls their scientist neighbour, the invention our three leads discover in his room holds the promise to turn potential gains into inevitabilities. The deceased Mr Bezzerides’ bulky machine is programmed to take pictures from 24 hours into the future, meaning that if the day’s racing results or a completed painting are held in front of the camera at the designated time, Jasper and Finn will see them a day in advance, removing all uncertainty or creative frustration.

While things appear to be going swimmingly at first, it isn’t long before difficulties arise. Jasper’s violent bookie soon catches on to their scheme and attempts via intimidation to exploit the invention for his own gain but more dangerous than any human villain is the insanity-inducing nature of the machine itself. The regular images from the future introduce a whole new dimension into their lives that none of the roommates entirely comprehend. The device starts printing out photos of things that no one seems to have planned, the first and mildest being of Callie and Jasper kissing. Fearful that deviating from the predicted timeline could have fatal consequences, the three leads feel that they have no alternative but to continue recreating the images in the photos. Do the photos show what they choose to do or do they choose to do what the photos show? Are they even capable of straying from the timeline or are their actions predetermined? Could they change the future (or even the past) through their choices or will their choices always lead them to the futures shown in each picture? These are some pretty weighty questions that no one seems to be able to answer. Finn, Callie and Jasper struggle to stay in control of their reality but it’s clear that they’re way out of their depth. Time, it seems, is a slippery beast that can’t be so easily manipulated.

Bradley King subtly creates a setting of both dream-like intensity and noirish claustrophobia with his saturated green and brown interiors and ominous coverings of light and shadow. The illustrations of loops and spirals he integrates into the film via Finn’s paintings help to highlight the perplexing rabbit hole we’re tumbling through but the film finds its signature image in the numerous rows of photographs located on Mr Bezzerides’ wall. The several mysteriously absent pictures in the dead man’s obsessively organised collection suggest missing pieces in a tantalising puzzle. It’s an incomplete vision of the past always looming in the background. Supporting players come and go but none make an impression as strong as the three main characters swept up in this storm. Matt O’Leary and George Finn engage us with two contrasting performances of increasing unhingement, one more understated than the other. But the cast’s real secret weapon is Danielle Panabaker. Like the film she’s in, her performance is one of buried complexity.

I doubt I’m the only one who’ll be reminded of the 2004 sci-fi Primer, another pretty great low budget film about everyday folk who find their reality tied into some maddening knots when they try to utilise time-travelling technology for personal gain. Both films succeed in building a labyrinth of theoretical notions for the viewer to explore but, while Shane Carruth’s film does so through its bewilderingly intricate story of parallel timelines, King’s film creates its brain-hurting tangle of ideas through a relatively linear series of events (though a second viewing will certainly reveal a few things). This is perhaps a key factor in why Time Lapse is a slightly more relatable work than Primer, transcending its hypotheticals to say something about the way in which we currently live. It sheds light on our fixations, from the way the future pulls us forward with the lure of possibility to our constant reassessing of the ever-changing past. It taps into the desire for our own lives to follow a neat and inspiring narrative arc and plays on our need to collect and chronicle the key moments over the course of our existence. Anyone who’s ever spent an extended period of time awkwardly posing with a calculated smile for the perfect wedding or graduation photo will know what I mean. People have a bad habit of keeping their minds anywhere but the present and Time Lapse exaggerates this way of living like a rubber band stretched too tight. The three leads are strained between the future and the past, keeping us in constant suspense as we wait for someone to snap.
Like this Review?
Write your own review?
DooVOTE
Not for me
Like this Review?
Write your own review?
COMMENTS 0
Your Comment...