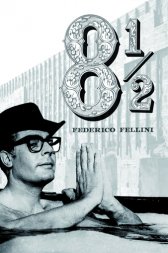 8½
Italy, 1963, 138 minutes Drama, Fantasy, Arthouse, Classics
Widely touted as one of the all-time great works of cinema, Federico Fellini’s 8½ is an elusive film about even more elusive things. It’s a meaningfully chaotic picture about trying to distil meaning from chaos and it’s a creative success about creative failure. It chronicles the resonant moments in one man’s life and admits that it can’t quite clarify why they matter. Doing justice to its early working title of The Beautiful Confusion, 8½ is a daring high wire act and an outstanding technical achievement that channels its story of artistic crisis into something sweepingly, uniquely profound.

Working again under Fellini’s direction after his winning performance in La Dolce Vita, Marcello Mastroianni plays Guido, a creatively blocked director feeling constantly distracted from the development of his latest semi-autobiographical work. Between avoiding his mistress (Sandra Milo) and disappointing his wife (Anouk Aimée), Guido spends time reflecting on his past, searching for answers and escaping into fantasies. The narrative seamlessly weaves in and out of Guido’s dreams and memories, to the point that it becomes impossible to distinguish real from imagined. The actress named Claudia, tellingly played by the legendary Claudia Cardinale, seems especially intangible, generally appearing only fleetingly in Guido’s visions playing the woman in his film that Guido intends to be a symbol of purity, innocence and redemption. The story, in a sense, is a mess but a brilliantly orchestrated mess that skilfully highlights the mysteries and confusions of life and the human psyche. Characters suddenly enter the narrative then leave before you’ve even noticed they’re gone because the film is confined within the periphery of Guido’s life. What these supporting players actually do isn’t as important as the impressions that they make. They’re all just additions to the fabric of the filmmaker’s mind.

This perception of the world is completely in tune with the engrossingly complex lead’s own self-involved view, seeing everyone he crosses paths with as a supporting player in his existence, rather than a fully-rounded individual with a long, complicated life of their own. Guido lacks awareness of the emotional impact of his actions and underestimates his own transparency, not realising when people detect his deceptions and cowardly evasions. His wife, Luisa, in particular seems more observant of Guido’s fraudulent nature than even Guido.


It’s made abundantly clear from the film’s choice of protagonist and its title (8½ being Fellini’s count of the number of films he’d made so far) that this film was meant to be viewed at least in part as a very personal work from the director. But if the weary half-heartedness of Guido’s filmmaking is meant to reflect Fellini’s own exhaustion, it’s evident that the director had got his groove back by the time shooting began. Every shot seems perfectly placed and every cut is perfectly timed for the film to fold out with effortless cohesion, like one extended monologue. Fellini hardly wastes a square inch of a single frame, saturating (but not over-saturating) his backgrounds with rhythmic movement and entrancing production design. His thoughtfully precise camera creates inexhaustible space, extending rooms by their mirrors and constructing distinct layers to the crowded environments he observes. This may well be the best directed film of Fellini’s celebrated career.

8½ remains one of those rare feats of cinema that have proved highly influential (acclaimed descendants from recent years include Charlie Kaufman’s Synecdoche, New York and Paolo Sorrentino’s The Great Beauty) and yet still wholly unique. Even Fellini himself never made another work that so gracefully blended irony with sincerity, surreality with relatability and ambiguity with insightfulness, but once was enough. This richly intricate film is built to be endlessly re-seen, enjoyed and puzzled over. The final paradox of 8½ is that it refutes itself. Apparently when a great director doesn’t know what kind of film he wants to make, he makes a masterpiece.
Like this Review?
Write your own review?
DooVOTE
Not for me
Like this Review?
Write your own review?
COMMENTS 0
Your Comment...