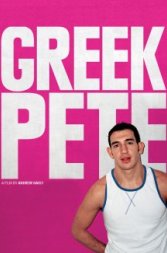 Greek Pete
UK, 2009, 75 minutes, SD Documentary, LGBT, Arthouse
I saw this at a screening in Hammersmith of all places, which isn't usually a go-to place for independent, art-house or gay cinema, but it was very busy when I arrived. And for good reason. This film won prizes at Outfest and some other festivals and was British, quite a rarity, so I made sure I checked it out.

I left the screening wanting to talk about the film, to discuss it with as many people as possible (unfortunately I went on my own) as it is nothing like I have ever seen before. Some scenes are incredibly powerful and moving, and I wanted to know exactly which moments were real and which were staged. Nothing seemed staged at all (it is apparently a 'docu-drama') and although Pete himself has approached this line of 'work' with a goal to pull together enough finances to invest in an education and a better future, some of the other boys amongst his friends do not have this immediate sense of ambition. What happened to them? This is what I thought was very brave about the film. It never at any point made a judgment. It was an intimate peek into the lifestyle of a rentboy and dashed any preconceived ideas that people have about the oldest profession in the world. Pete is not that person you expect to see, but some of his friends are, yet they all look after one another. This is not Wiktor Grodecki, and anyone who watches this thinking that their Daily Mail high-ground will be bolstered by a mucky, seedy voyeurism that condemns it's subject matter via subjectivity will not get what they want. There is care, love and affection here, alongside extremely raw moments of insecurity and depression simmering beneath that confident veneer you see in many young men. There is no forced introspection. No moment where Pete must explain himself to camera. This is a film projected from within a society that does not judge itself and would never care to.

Greek Pete will divide audiences, but if you go in with an open mind, you will be stirred, jolted into action. It will make you think, and talk about it with others who have seen it. Any film that encourages intelligent debate should be seen, and this is one of them.
Like this Review?
Write your own review?
DooVOTE
Not for me
Like this Review?
Write your own review?
COMMENTS 0
Your Comment...
LIKES 1
MaeMaeDecena
MaeMaeDecena