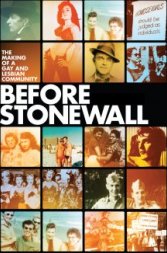 Before Stonewall
USA, 1984, 87 minutes, SD Documentary, History, LGBT
Using the Stonewall riots of June 27th 1969, in which the streets of New York were greeted with three nights of rioting from the cities gay community, Schiller and Rosenberg use various events in America’s history in order to depict how the persecution of LGBT communities ultimately triggered the events at Stonewall.

What is clear upon first viewing, is how much Before Stonewall benefits from its concise narrative structure. Instead of focusing on the actual events detailed in the documentaries title, Schiller and Rosenberg decide to begin before Stonewall, instead offering a historical journey through the perseverance of said people in the face of constant discrimination. Beginning in 1920’s Harlem and following the proliferation of LGBT communities up until and after World War 2 immediately gives Before Stonewall a concise, yet engaging linear narrative trajectory. History becomes the backbone in which both directors follow, allowing Before Stonewall to progress against the backdrop of the particular decade being discussed. In doing so, Schiller and Rosenberg are able to perfectly detail how the persecution originally manifested itself, the bravery of those faced with discrimination and how they adapted to it as well as why there was in fact a distaste for those whom were thought of to have an ‘illness’.

Furthermore, Schiller and Rosenberg must also be credited for the expertise juggling of chosen interviewees with raw footage. Perhaps unsurprisingly, those chosen to document their fight on camera come across as humorous, brave and proud individuals, reciting episodes of mistreatment due to nothing but their sexuality with a refreshing guileless. The right to celebrate their sexuality outright was not something these people were willing to surrender, which not only shows the strength of character evident within these people, but also seems to mock histories countless attempts at suppressing them. As various excerpts of raw footage compliment Stonewalls historical accuracy and talking heads, it is the authorities attempts to quell the surge in sexual openness that attribute moments of sheer hilarity within Before Stonewall. Awash with the somewhat maniacal Catholicity of the McCarthy era, footage of governmental attempts at a witch hunt against LGBT communities are juxtaposed with that of mass meeting between such communities. Scenes of police brutality only show this era to be riddled with naivety, whilst footage of proud homosexuals, full of sexual vigour makes a mockery of those asked to subdue those for reasons they had no understanding of.

Undoubtedly, watching Before Stonewall in todays more LGBT friendly society possibly leads to a lessening of the senses when faced with a documentary upon such an issue. There are those who will remember a great deal of pain if directly involved during the struggles at this time, and in attempting to make this documentary applicable to those outside of LGBT communities, Schiller and Rosenberg forego documenting some of the era’s more extreme cases of oppression. Yet despite this, Before Stonewall succeeds in celebrating the differences in people and does so in a Universal sense. You do not have to be from a LGBT background or any minority group for that matter to enjoy this highly informative and touching piece of documentary making.
Like this Review?
Write your own review?
DooVOTE
Not for me
Like this Review?
Write your own review?
COMMENTS 1
Your Comment...
LIKES 1
MaeMaeDecena
MaeMaeDecena