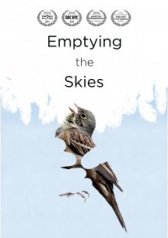 Emptying The Skies
USA, 2013, 78 minutes, SD Documentary
So far we have seen how both music and religion are themes that have and will continue to prevail in documentaries for years to come, yet what of those documentaries that choose to focus on perhaps the more niche happenings within the world? Are they afforded the same consideration as those documentaries that detail more universal themes? In the case of Emptying the Skies, apparently so.

Directly inspired by the American novelist and essayist Jonathan Franzen, whom penned the essay ‘Emptying the Skies’ published globally in the New Yorker, Emptying the Skies depicts the lengths a group of Pan-European bird lovers go to in order to protect various species of songbirds. With many species facing extinction at the hands of illegal poaching, a lucrative trade, the Kass brothers (Douglas & Roger) decided to spend a year in Southern Europe documenting how in fact these self-confessed bird lovers attempt to disrupt the poaching that has become so rife.

If you are some one who believes that all of Earth’s creatures deserve the right to live a long and prosperous life, then having your heads turned towards the illegal, yet seemingly unpunished act of songbird poaching may interest you. However, as its stands, approximately 12.5% of the worlds population live below the hunger line, which until this is remedied, precedence will always favour the plight of man than that of the world’s animals. Therefore, documentaries such as Emptying the Skies do a great job at bringing the world’s hidden phenomena’s into the public sphere.
Like this Review?
Write your own review?
DooVOTE
Not for me
Like this Review?
Write your own review?
COMMENTS 0
Your Comment...