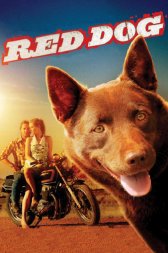 Red Dog
Australia, 2011, 92 minutes Family
“A dog of a certain type can do well in a lonely town”

This is a film about a dog.

That should be enough to sell you on this movie. If for some unknown reason you still need convincing, ‘Red Dog’ is based on the true story of a wandering Kelpie (scientifically proven to be the best dog) and the desert town that claims him as their own.

Red Dog happily roams the Pilbara, a remote region of Western Australia, befriending the residents of mining town Dampier. Coming and going as he pleases, adored by all, Red Dog doesn’t have a ‘master’ until he meets John (Josh Lucas) and his fiancé Nancy (Rachel Taylor). Clever, handsome and unfailingly loyal, Red Dog becomes a part of Dampier and its people, and helps them all through hard times.

As one can expect from this uniquely Australian story, ‘Red Dog’ is a uniquely Australian film. Cinematographer Geoffrey Hall beautifully showcases the Australian landscape, and a supporting cast of colourful characters perfectly recreate small town life in rural towns, where everyone knows everyone, and everyone has a story. The film boasts a wealth of Australian and international talent and is driven by strong performances, particularly from John Batchelor as Peeto, and Koko the kelpie, who plays Red. The distinctly Australian humour that fuels the film – “They came from all over! Poland, Ireland, Greece – even Melbourne!” – helped make ‘Red Dog’ one of the most successful Australian films of all time.

‘Red Dog’ is simultaneously heart-warming and heart wrenching; the kind of film that plays with your feelings but ultimately leaves you smiling. Dog lovers in particular will be touched by Red’s loyalty, but I defy even the staunchest cat-person to resist this charming film.