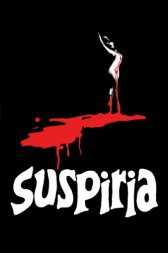 Suspiria
Italy, 1977, 98 minutes, HD Horror, Giallo, Classics, Arthouse
Dario Argento’s kaleidoscopic classic Suspiria is not set in our world. It takes place in a world of vibrant expressionism – of harsh reds, blues, yellows and greens; of imposing and fantastical architecture and labyrinthine interiors. It’s a world where a heavy rainstorm means that sinister forces are at work and maggots in the attic mean that something ugly is lurking just beyond the pretty surfaces. Making only as much sense as it needs to, the film is a modern-day fairy tale of the darkest variety and more than earns its reputation as one of the creative peaks of Italian horror, as well as ‘70s horror in general.

Harper plays Suzy Banyon, a naïve young American ballet student who begins the film arriving in Munich one ominously windy night to enrol in a prestigious dance academy. At the entrance of the academy, she briefly crosses paths with one Pat Hingle, an expelled student seen leaving in fear. When Pat is gruesomely murdered that same night, it provokes Suzy and fellow student Sarah (Stefania Casini) to investigate. As they piece together the many shady occurrences in and around the academy, Suzy gradually comes to the realisation that the school is home to a great evil of the supernatural kind.\\
From a narrative perspective, much of the film consists of a series of puzzles to be solved and clues to be interpreted, suggesting that Argento wasn’t entirely ready to leave the Italian crime subgenre of giallo behind. The character of Sarah in particular is written with a flair for interpreting unusual sounds, be it working out that the school director is in the building from the sound of her snoring or determining with a little help from Suzy where the academy staff members go every evening by listening to their footsteps.

Meanwhile, Suzy’s first clue comes in the form of two key words she overhears from Pat and, in true Argento fashion, the solution is hidden in plain sight for the viewer to spot. So it would be evident from the script alone that Argento has a genuine interest in the acts of hearing and seeing but his curiosity becomes fully justified once you actually listen to and look at this film. Prog rock band Goblin provide one of the all-time great horror soundtracks, ranging from the music box creepiness of the main theme to the overwhelming assaults on the senses that accompany the more intense set pieces. Combining this with the film’s astonishing set design and surreal lighting, Suspiria has the claustrophobic atmosphere of a nightmare that the viewer is trapped in. Evil feels ever present and terrifyingly powerful. It seems fitting to the film’s fairy tale influence that the only way out of the surrogate enchanted castle for Suspiria’s own princess Suzy is to solve the riddles and follow the clues.

Dario Argento undoubtedly raised the bar for death sequences with his operatic, elaborate set pieces. In this sense, the impact of his best film is clear in the convoluted murder scenes of such popular franchises as Saw and especially A Nightmare on Elm Street. But the importance and originality of the film runs deeper than this. It’s an often ghastly and grotesque film but just about any given frame of it could be hung in a gallery because it’s executed with a formal brilliance that blurs the line between high art and sadistic schlock. It’s a film that provides a consistent onslaught of visual gut-punches all while deviously working its way into your subconscious. In its blending of the cleverly subtle and the brazenly unsubtle, Suspiria becomes a disorienting and menacing work that drops you into a strange, twisted reality for you to desperately fend for yourself. It just might be the horror film in its purest form.
Like this Review?
Write your own review?
DooVOTE
Not for me
Like this Review?
Write your own review?
COMMENTS 0
Your Comment...
LIKES 2
snakeeyes
MaeMaeDecena
snakeeyes
MaeMaeDecena