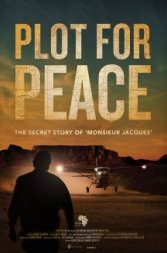 Plot For Peace
South Africa, 2013, 84 minutes, SD Documentary, History, African, Thriller
Upon first watch, it is hard to say whether Carlos Angullo and Mandy Jacobsen’s documentary Plot for Peace is primarily concerned with its ebullient maverick in chief, Jean-Yves Ollivier, or the actual disintegration of apartheid in South Africa. Ollivier is the cigar smoking, solitaire playing gas and oils trader whom over the course of the seventies and eighties established a powerful as well as politically inclined set of contacts between both Europe and Africa. Charming, knowledgeable and with a knack for cementing deals amongst leaders and countries otherwise at ideological loggerheads, Plot For Peace unveils the role played by Ollivier during the Brazzaville protocol, independence of Namibia and subsequent dissolution of apartheid. However, despite Ollivier’s instantly likeable demeanour, throughout Plot For Peace he remains somewhat reticent as to why (at his own financial cost) he went to such lengths for the plight of South Africa and its neighbouring countries. Did Ollivier really navigate through the myriad of Southern Africa’s politics and racial tensions to appease his fellow man, or was he doing so for financial gain? Although Plot For Peace, and Ollivier himself, provides no answer to this question, failure to do so only adds to the mystery of Ollivier and, the allure of this documentary. I for one had no knowledge of Jean-Yves Ollivier and his apparent role during key moments of Southern Africa’s history, and it is exactly this reason why Plot For Peace makes for such a fascinating watch. Whether or not Ollivier acted for personal gain as some political Svengali, or was in fact a self styled bastion of human rights, his involvement none the less helped work for a greater good. Technically, Angullo’s editing is of the highest calibre, marrying the narrative of Southern Africa’s relationship with communism and conditions of its people in tandem with its impressive choice of talking heads. Additionally, the choice of raw footage also allows Plot for Peace to remain firmly within its subject matter whilst never shirking from the true brutality and atrocities carried out during its depicted time. Furthermore, despite the severity of people’s livelihoods during this time, Plot For Peace manages to inject brief, yet very welcome, moments of humour. The sheer lengths to which Ollivier underwent are somewhat astonishing, playing political figureheads off against each other throughout some of Southern Africa’s most unstable countries. Ultimately, Plot For Peace sheds light on the very lengths it took to abolish apartheid and it does so in both an utterly compelling and informative way.
Like this Review?
Write your own review?
DooVOTE
Not for me
Like this Review?
Write your own review?
COMMENTS 0
Your Comment...
LIKES 1
MaeMaeDecena
MaeMaeDecena