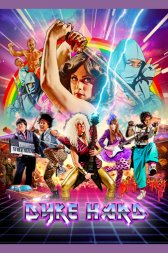 Dyke Hard
Sweden, 2015, 94 minutes Comedy, LGBT
One might think that gathering a bunch of fake trailers together is a bad idea for a feature film. But one might not have seen Dyke Hard yet. A road movie was the format chosen to link all different adventures of the band; and from a night in a house haunted by a lesbian ghost to a stay in prison (including a grandiose wall-humping escape), Dyke Hard follows the epic journey of unique characters. The soundtrack plays a consequent role as well, alternating rock anthems and ballads (what else would you expect from a sexploitation-horror-syfy-musical film?). Dyke Hard makes the most of its very low-budget production, where everything from costumes to dubbing is DIY, almost making it a b-movie of a b-movie. I saw this film during Berlinale; it was selected in the Panorama section and proved the audience that intense dramas were not the only films deserving a place in festivals! And yes, the film is as crazy/colourful/glorious as its poster.
Like this Review?
Write your own review?
DooVOTE
Not for me
Like this Review?
Write your own review?
COMMENTS 0
Your Comment...