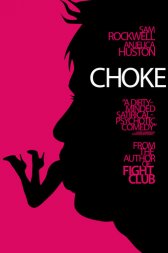 Choke
USA, 2008, 89 minutes Comedy, Drama
Victor Mancini is a sex-addicted med-school dropout, who keeps his increasingly deranged mother, Ida, in an expensive private medical hospital by working days as a historical re-enactor at a Colonial Williamsburg theme park. At night, Victor runs a scam by deliberately choking in upscale restaurants to form parasitic relationships with the wealthy patrons who save him. When, in a rare lucid moment, Ida reveals that she has withheld the shocking truth of his father's identity, Victor enlists the aid of his best friend, Denny and his mother's beautiful attending physician, Dr. Paige Marshall, to solve the mystery before the truth of his possibly divine parentage is lost forever. Anyone who's read Palahniuk's writing will know that his books are frequently dark, very twisted and somewhat humorous. "Choke" is first and foremost a comedy. The acting is impressive to say the least. "Choke" proves to be a most offbeat movie, and is all the more entertaining for it.
Like this Review?
Write your own review?
DooVOTE
Not for me
Like this Review?
Write your own review?
COMMENTS 0
Your Comment...