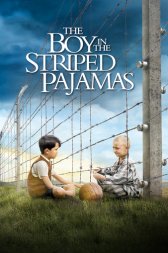 The Boy in the Striped Pajamas
UK, USA, 2008, 94 minutes Drama
The innocent son of a high-ranking Nazi commandant, Bruno has been largely shielded from the harsh realities of the war. When Bruno discovers that his father has been promoted and that their family will be moving from Berlin into the countryside, he doesn't take the news well. Increasingly bored in his sprawling yet dreary country abode and forbidden by his mother from exploring the backyard, young Bruno searches for something to do while his older sister plays with dolls and vies for the attention of handsome Lieutenant Kotler. One day, bored and gazing out his bedroom window, Bruno spies what first appears to be a nearby farm and his parents refuse to discuss it, and all of the inhabitants there are curiously clad in striped pajamas. Both young actors give enormously moving performances and the manner in which Herman directs the action underlines the blur of perception many German's had about the reality of the Final Solution. But for what I perceive as the reason this movie sustains the powerful message it does is the manner in which it ends. There are no attempts to 'sanitize' this movie: it simply ends with a lightning bolt jolt that is one of the most powerful statements in all of the many movies about the Holocaust. It is simply a brilliant masterpiece of a movie from every aspect.
Like this Review?
Write your own review?
DooVOTE
Not for me
Like this Review?
Write your own review?
COMMENTS 0
Your Comment...