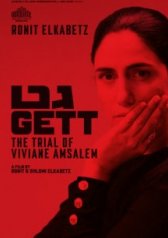 Gett, the Trial of Viviane Amsalem
Israel, 2014, 115 minutes Drama
In Israel, civil marriages and divorces do not exist. Only a Rabi is allowed to declare them - and divorce can only be prounonced with the complete consent of the husband.
In GETT, the wife, Viviane Amsalem fights for years to get a divorce that her husband refuses to agree on. This leads to an absurd and tragic process where a woman fights the judges and her husband to get her freedom back. To lighten up the sometimes suffocating atmosphere, GETT introduces funny scenes and characters, intervening as witnesses in the divorce trial.

The pattern of the film seems at times repetitive due to the stuck situation and the small room where the trial takes place. This leads to the film loosing some of its strength. But the repetitive cycle is also set to remind the audience about the endless and absurd process of this trial.


GETT is the third film from the Elkabetz's siblings, after TO TAKE A WIFE and THE SEVEN DAYS.
Ronit Elkabetz is a magistral Viviane, both damaged and dignified. Simon Abkarian plays a husband that clearly still loves his wife, but put on an quiet and arrogant posture.
After premiering in Cannes in the Directors' Fortnight selection,GETT received many awards from festivals and is nominated for a Golden Globe in the Best Foreign Language Film category.