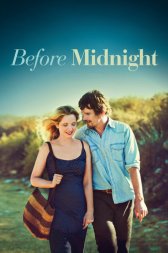 Before Midnight
Greece, USA, 2013, 108 minutes Drama, Romance
Following the success of Richard Linklater's first two films of the franchise (weird to associate the word 'franchise' with such an indie film I know) 'Before Sunrise' (1995) and 'Before Sunset' (2004) we find ourselves once again thrust into the chaotic and charismatic world of Jesse and Celine in 'Before Midnight' (2013). Nearly two decades later and what's changed? Apart from the fact that Jesse has left his previous partner and created a new family - complete with two gorgeous twins - with Celine, absolutely nothing. As in the other films, they talk, muse over, argue and display an effervescent spark that not many other relationships know - credit due to the wonderful Hawke & Delpy - and that's about it.\\
\\
This formula has worked in the last two films, but for some reason, falls flat in this third (and hopefully final) film in this love epic. There are some wonderful scenes, so simple yet so eloquently portrayed (one of my favourites follows the car scene after Jesse says goodbye to his son) but, unlike in the film's predecessors, I found my attention wavering during yet another one of their indulgent and laborious discussion. 'That's what they do!' I hear you say, 'They talk and talk and talk, and that's what makes their relationship so fantastic!' and fantastic it is, but the bright spark between them seems to have dulled this time round. Perhaps this is too harsh a criticism, for the film is wonderfully made, with everything appearing so brilliantly candid that your almost forget you're watching a film.\\
\\
And yet. I was underwhelmed. Good, but not brilliant, this film offers much to the viewer. But somehow, it didn't quite knock the ball out of the park. Not this time anyway.
Like this Review?
Write your own review?
DooVOTE
Not for me
Like this Review?
Write your own review?
COMMENTS 0
Your Comment...
LIKES 1
WillPage
WillPage