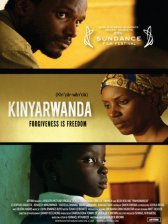 Kinyarwanda
France, USA, 2011, 100 minutes Drama, Romance
Alrick Brown’s Kinyarwanda (2011) is set during the 1994 Rwandan genocide. Telling a tangle of stories that puts faces and complexity to the facts which even today are only beginning to surface in full, the film is based on true accounts of survivors who took refuge in the Grand Mosque of Kigali and the madrassa of Nyanza while bloody killings between the Hutu and Tutsi ethnic groups lasted. There is some narrative incohesion in Brown’s first film, but he has attempted to communicate a yearning for reconciliation through these separate story threads, as well as taken the plunge as the first Rwandan to make a film about this genocide. Moving and heavy-going, but has some beautiful moments.
Like this Review?
Write your own review?
DooVOTE
Not for me
Like this Review?
Write your own review?
COMMENTS 0
Your Comment...
LIKES 1
WillPage
WillPage