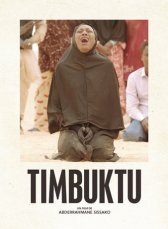 Timbuktu
Mauritania, 2014, 100 minutes Drama
Timbuktu takes up the havoc wreaked by the imposition of Sharia Law upon the simple lives of this ancient, spiritual city’s locals, addressing the devastating consequences of religious fundamentalism. It says nothing new of the ills of religious intolerance, yet it says it all with expansiveness of vision and spirituality. This prevents his film from becoming too polemical, but also gives it a scattered, pensive rhythm that says it has no need for a response of any kind – self-righteous outrage included – from his Western audiences.

We follow a number of the inhabitants and the jihadists; the latter roam the streets on mopeds with rifles slung over their shoulders, lazily barking out endless prohibitions through their megaphones: no smoking, no drinking, no football, and no adultery. We witness the harassment and ever-present threat of force that women living under Sharia law endure, the disproportionate ‘justice’ meted out for the smallest things, and the local imam’s distress at their treatment of the truly pious. Meanwhile, in a tent amongst the isolated dunes outside Timbuktu, Kidane (Ibrahim Ahmed) is a simple cattle farmer living in domestic bliss with his wife Satima (Toulou Kiki) and their daughter, Toya. Although they have stayed while their neighbours have fled, they live a fulfilling life of simple faith and closeness; Ahmed’s performance is soulful, while Kiki’s quiet strength and dignity mesmerises the viewer. They would border on symbols if it were not for Kidane’s own guilt in their impending doom, and for Sissako’s style, which prevents there being any ‘main’ characters or morally-simplistic melodrama.

Sissako’s mastery over soft but heartbreaking scenes, like a forbidden football match played with an imaginary ball and a mother having to silently consent under duress to marrying her daughter off, help flesh out this tale in all its bitterness, humanity and hope. Timbuktu shows him in full maturity as a writer, a director and a critic of the world, while Amin Bouhafa’s original soundtrack speaks volumes when reason and compassion are intimidated into silence. A beautifully shot and empathetic film, it communicates a yearning for human dignity and peace that resonates well beyond its time and continent.
Like this Review?
Write your own review?
DooVOTE
Not for me
Like this Review?
Write your own review?
COMMENTS 0
Your Comment...