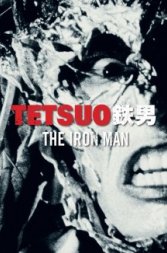 Tetsuo: The Iron Man
Japan, 1989, 67 minutes, SD Science Fiction, Horror, Classics, Asian
Tetsuo: The Iron Man is director Shin'ya Tsukamoto’s surreal jaunt in to an unconscious world of violence, sexuality and primal fear, fighting to manifest itself in a repressed material world. The plot is one of those cliché structures we have seen a million times – boy meets girl, boy (Tomorowo Taguchi) and girl (Kei Fujiwara) go for a drive, boy hits metal fetishist (Shin'ya Tsukamoto), boy begins transformation in to a metallic osmosis creature manipulated by metal fetishist from beyond the grave. Cliché, right?

The divergent narrative structure is not always easy to follow – the action is as fast moving as the blades of a chainsaw, and each scene is so mesmerising it’s possible to forget about the plot. The cinematography, special effects and editing combine for an outstanding visual payoff. For a film that’s twenty-five years old, the visual effects have held up remarkably well; the stop motion is particularly remarkable, giving the film a tactile quality you don’t get from CGI. The use of dark and light by cinematographer Kei Fujiwara (who played ‘Girl’) is superbly contrasted, and the use of light and shadow are reminiscent of German expressionist films of the early 20th century. Tetsuo is surreal, in the true sense of the word, the influence of such films as Un Chien Andalou is evident, as well as Katsuhiro Ôtomo’s Akira, released the year before.