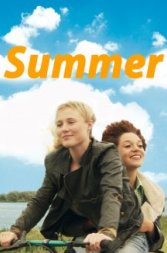 Summer
Netherlands, 2014, 86 minutes, HD LGBT, Coming of Age, Romance
An impressive film by Colette Bothof! The film’s story was about
the people in a remote village, where spacious fields and power pylons were almost
everywhere. The setting was wonderfully established in the film. I like the
extreme long shots in the film specifically at the very start of the movie. It really
helped to establish to the audience the kind of environment and ambience that
place has. The music used in this film were also good. It somehow set the tone
and vibe of every scene in the film. I noticed the part when Anne was in the
car together with her brother and his friends, that moment when she was feeling
the wind outside and smiling, the music somehow helped the viewers feel the
caress of the wind as it touches her skin. It obviously highlighted the mood of
that scene, it was very calming and relaxing. I really like it! What I also
love in this film were the acting performances of the casts. The scene of Anne’s
family eating together was very natural. The acting of Steef Cuijpers (Anne’s
Father), Willemijn van der Ree (Anne’s Mother), Anne’s brothers specially her
little brother and Sigrid Ten Napel (Anne) were just right on point. I also
like the cinematography of the film. The camera angle and framing were very
good. The screenplay was interesting. There were a lot of issues tackled in
film regarding religious beliefs, discrimination, wife battering, drunk driving,
rape, premarital sex and other issues about family. But what I really like
about the movie was its undertone. The film was about finding what makes you happy
and finding your true identity, it was about LOVE and it highlights the
importance of family. I like the film. I will rate this film 4 stars.
Like this Review?
Write your own review?
DooVOTE
Not for me
Like this Review?
Write your own review?
COMMENTS 0
Your Comment...