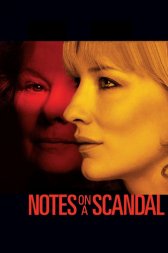 Notes on a Scandal
UK, 2006, 92 minutes Drama, Romance, LGBT
Based on the prize-winning novel by Zoe Heller, Notes on a Scandal is a psychological drama about secrets and obsession, which see two of today’s most interesting actresses go toe-to-toe for the first time on film. When Sheba Hart (Cate Blanchett) joins a London secondary school as the new art teacher, she befriends fellow teacher Barbara Covett (Judi Dench), who sees in her a kindred spirit and an escape to her lonely existence. But their friendship is threatened when Barbara find outs about the illicit affair Sheba is having with one of her high school students (Andrew Simpson). Barbara suddenly becomes the keeper of Sheba’s secret. Barbara has secrets of her own. Instead of exposing her to both her husband (Bill Nighy) and the world, she manipulates it for her own selfish reasons and triggers a chain of events that could potentially destroy both their lives.
Like this Review?
Write your own review?
DooVOTE
Not for me
Like this Review?
Write your own review?
COMMENTS 0
Your Comment...
LIKES 1
MaeMaeDecena
MaeMaeDecena