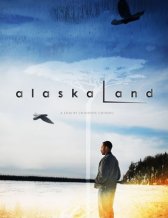 Alaskaland
USA, 2013, 76 minutes Coming of Age, Drama
Nigerian-born director Chinonye Chukwu, who grew up in Alaska, uses her unique experiences of two cultures to tell the story of Chukwuma (Alex Ubokudom), ‘Chuck’ to his American friends, in a moving coming-of-age tale.

Nigeria. Alaska. They don’t have much in common and not many will experience both of these cultures but teenager Chuck is one who will. Struggling to fit in with the other black kids, Chuck neglects his family to try and win friends. A promising student from a stable family, Chuck is kept on the verge of disaster until the fourteenth birthday of his little sister Chidinma ‘Chi Chi’ (Chioma Dunkley), when his world is turned upside down, and he is partly to blame.

Left alone for two years in the inhospitable town of Fairbanks, he loses control over his life and is found one day in hospital by his uncle and his now Igbo-speaking sister who makes perfect jollof rice and who bears African gifts that Chuck scoffs at, obviously not wanting to lose any street cred.

The siblings embark on a long road to re-establishing a relationship and the brother-sister dynamics are easy to identify with. Through getting to know his sister better, he commences the slow reconciliation with his roots.

Chi Chi is that little sister we all instinctively want to protect, a lost girl caught between being a woman and being that little girl who longs for someone to look after her. Her desperation to be liked at a house party, where she awkwardly tries to dance like the other girls, may bring back painful memories of our teenage years, and yet the difference of cultures would make Chi Chi’s experience ten times worse.

We discover that Chuck is equally fragile. There are many visual representations of his happy childhood recollections of his family. Both Chuck and Chi Chi come to the realisation that they need each other, and a snowball fight beautifully captures their return to true brother-sister behaviour. There are many other touching moments in the film between the two leading actors onscreen, such as when Chi Chi teaches her brother the song their mother would sing when cooking and when they recreate their parents’ African-inspired dance moves.

John Avarese’s soundtrack offers us a taste of Africa, in such a subtle way that the Zozo Afrobeat doesn’t strike us as discordant with the Alaskan setting. The Alaskan landscape isn’t predominant, intentionally so to increase the feeling of claustrophobia, but we still do get a snapshot of this magical land: a glorious sunset, vast white expanses and huskies and humans at play.

Chukwu’s first feature-length film is a highly realistic portrayal of some of the most difficult times in a person’s life. The simplicity of the shots and action allow genuine sentiment to shine through and this is where the film gets its charm.