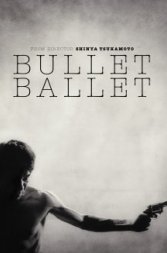 Bullet Ballet
Japan, 1998, 98 minutes, SD Thriller, Science Fiction, Asian
Electrifying, intense and compelling!  These qualities are just but a few of those that transcends this movie.  Shinya Tsukamoto, who has his own personal style in filmmaking and quite unconventional quirks overwhelms the viewers with this movie about a man who, after losing his girlfriend thru suicide, sets out to trace the gun used by the former in taking her life and in so doing aims to reconcile with the despair and anguish that he's tormented with. The journey takes him to the belly of the underworld and the territory of gangsters and a lady named Chisato (Kirina Mano) becomes the link between him and the gangs,  and ultimately the viewers will witness that Chisato will play a pivotal role in Goda's quest for revenge and self-vengeance. Beautifully shot in black and white with gunsight photography utilized,  there are scenes that are so powerful that the absence of dialogue is excusable enough. There are violent scenes, too, which were more intensified and with tension heightened more because of the industrial music and catchy musical scoring. Impressive acting portrayals not only by Tsukamoto who also wrote the screenplay but also from Kirina Mano as Chisato who shone in her role as the feisty, wily and sleazy girl closely associated to the gangsters.  Do check this out!
Like this Review?
Write your own review?
DooVOTE
Not for me
Like this Review?
Write your own review?
COMMENTS 0
Your Comment...