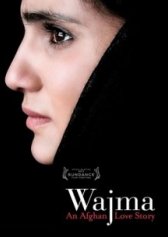 Wajma: An Afghan Love Story
Afghanistan, 2013, 86 minutes, SD Drama, Arthouse
Of the ideas presented in this film, I really freaked out at this: Mustafa disowned the child supposed to be his just because Wajma didn't bleed when they made love!  There's also this scene that was quite weird but was nevertheless enlightening and this was the conversation between Mustafa and the restaurant owner, who told him that some women don't have a hymen while in some other cases it's only after delivery that the hymen breaks. I was like, whoa, that was something straight out of a science class or something. This movie which explores issues like the effects of pre-marital sex and pregnancy, Afghan cultural traditions and family relationships gives  a lot of insight and understanding for the viewers.  We  get to understand how young women are tightly guarded, how  these young women are aware and yet some still break the rules and  how it demeans  the father figure and the family as a whole when the daughter gets impregnated out of wedlock. There are scenes that are so intense and so affecting and personally, that scene where the father was beating Wajma was so utterly brutal and over the top. Viewers even get the idea that the father would be more glad to see his daughter dead than pregnant.  Heartbreaking and emotional,  I finished watching it with a very heavy heart.  A very engrossing and powerful movie by Director Bormok Akram.
Like this Review?
Write your own review?
DooVOTE
Not for me
Like this Review?
Write your own review?
COMMENTS 0
Your Comment...