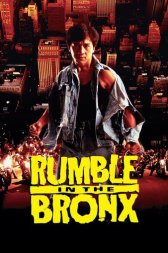 Rumble in the Bronx
Canada, Hong Kong, 1995, 91 minutes Crime, Action, Asian
Probably Jackie Chan's most famous film for stunts alone (at least, to Western audiences), this one's well worth watching for the comedy too, as Chan gurns his way through a series of increasingly ludicrous set-pieces. He's fully aware of this, however, and invites you to join in on the fun. The supporting cast are also in on it, and actually everyone's just having a bloody good time, as will you.
Like this Review?
Write your own review?
DooVOTE
Not for me
Like this Review?
Write your own review?
COMMENTS 0
Your Comment...
LIKES 1
blacksnakemoan
blacksnakemoan