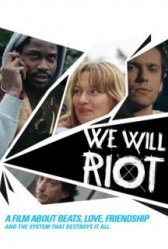 We Will Riot
Lithuania, 2013, 76 minutes, SD Drama
New York carefree DJ Luke takes a leap across the Atlantic to Lithuania to discover the grandma he never knew he had.

Despite the two cultures being very distinct in many respects, he finds like-minded people in the underground electronic scene.

The music is very important to the film, having a significant presence in each scene, beats precisely interacting with on scene movements. An inspiration to the dissatisfied youth, the music becomes a symbol of rebellion against the corrupt local politics.

It's refreshing to see a culture and a country that rarely features on the big screen and it helps us to see it through the eyes of Luke, an outsider, who goes on to be a leader.

"We Will Riot" shows a hybrid between how much society has advanced and yet how many problems it still has to resolve. Luke is able to flourish in a country where, years before, his grandma rejected her son's wife because of her race, but justice and equality on other levels are still far from reach. Sadly, as is often the case, the rebels are portrayed as the trouble-makers for fighting for what's right. They are given freedom but only within the limits that the State allows.